Home › Life › Josh Hamilton Is Not Alone And Neither Are You

Josh Hamilton Is Not Alone And Neither Are You 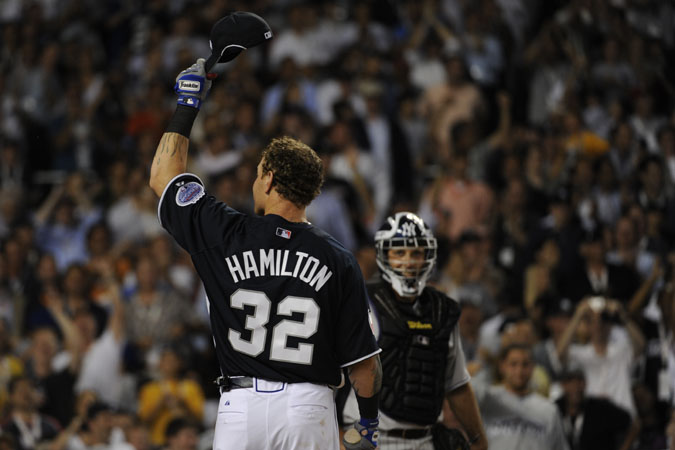 That simple, yet hard-hitting saying, is exactly what Josh Hamilton titled an article he wrote for ESPN The Magazine (as told to Time Keown) in July of 2007. At the time, Hamilton was finally where he was destined to be from the time he picked up a baseball bat: in Major League Baseball.

Hamilton was playing for the Cincinnati Reds and was one of the best stories ever to lace up his spikes in an MLB stadium. His freakish talent that made him the No. 1 draft pick of the Tampa Bay Devil Rays in the 1999 amateur draft was well known. Just as well known was his drug addiction to both cocaine and crack. It seemed that Hamilton was inching closer to a graveyard than a batter’s box before he made his MLB debut at 25 years old.

I still remember reading his tell-all article a few weeks before my 16th birthday. When the news came out yesterday about Hamilton admitting to a relapse (not his first, but his first known one with drugs) with “at least cocaine” my arm hairs stuck straight into the air and I had to convince myself that they weren’t shooting back into my body like countless needles. I felt sick to my stomach and the feeling lingered on in the back of my mind all day.

When Hamilton signed his five-year, $125 million contract with the Los Angeles Angels after the 2012 season, his fifth straight All-Star season, my heart said yes, but my brain said no. How couldn’t we all be ecstatic for Hamilton to earn such a contract that his talent certainly warranted and his story being one that no price tag could show its worth? Then, my realist mind had to play Debbie Downer and wait for this exact moment to happen. As we know, any and all drug addicts are ticking time bombs that could explode, no matter how “cured” they are.

This story isn’t about baseball or a “What If” scenario that we almost wish was fictional. This isn’t about what was, what could have been, or what will be with how Josh Hamilton’s legacy is remembered. No, this is a story of a human being that we can all connect and feel for. Don’t even try giving me some “He has $125 million reasons for not doing drugs” bullshit, because that’s what it is. Bullshit.

The reason that we fell in love with Hamilton when we were finally graced with his talent in an MLB stadium and the reason we feel for him today, is that we’ve seen it from so many that don’t supposedly have millions of reasons not to do drugs. No matter if it’s a friend, family, or a town acquaintance, that ticking time bomb has affected us in one way or another. And plenty of those times when he or she has been “cured” our hearts said yes, but our brains had to say no.

In Hamilton’s 2007 story, he briefly talked about an incident that showed where he was compared to putting on a Reds uniform every day. After writing about a wild night on an array of drugs, Hamilton continued with:

‘It’s the perfect example of what I was: a dead man walking. And now, as I stand on the green grass of a major league outfield or walk to the batter’s box with people cheering for me, I repeatedly ask myself one simple question: How did I get here from there?’

When I read that passage now, a few thoughts swirl through my mind. The first is on him referring to himself as “a dead man walking,” and as my head droops to the floor with that thought, I can only hope that he can keep his head up high enough and long enough to make that as far from a reality for as long as possible. Then, I go to that last question: “How did I get here from there?”

You’re not alone Josh, and that last question is why I believe so many people gravitate towards you and feel true sadness and pain for you. If you’re a drug addict or not, that question has popped in your mind at some point in your life. I know that’s one of my reasons for feeling such a connection with a star that I’ve never met in my life.

Once again, Josh Hamilton is asking himself how he got here from there. He’s not alone. Savor the memories of Hamilton the baseball player. Close your eyes when you think of him and picture the ball soaring out of Yankee Stadium with his radiant smile and hands up in the sky out of disbelief. When you open your eyes, remind yourself that Josh Hamilton is not alone and neither are you. He wrote that baseball was third back in 2007, and today it must still be third, if not lower on his life list, and that’s just fine.