Mike Piazza is a Baseball-Reference Hall of Fame player

*This column was originally published on SB Nation’s Amazin’ Avenue.

For the third straight year, the Baseball Writers Association of America has kept the greatest hitting catcher in baseball history out of Cooperstown. We already know that the biggest factor of all for Mike Piazza’s Hall of Fame absence is the unfair ‘S-word.’ Speculation.

First of all, I’ve always had my suspicions about Piazza, even though he never tested positive nor was he mentioned in the Mitchell Report.

Madden goes on to say that other players told him Piazza took steroids, but all that is irrelevant for this article’s purpose. We know that pure speculation is the laziest and most irresponsible way for a voter to handle his or her responsibility. Instead, this article is to show exactly how much Baseball-Reference loves Piazza as a Hall of Fame player.

Under all of Piazza’s stats on the website are two categories to take a look at. The first is simply named, “Hall Of Fame Statistics” which uses four subcategories: Gray Ink, Hall of Fame Monitor, Hall of Fame Standards, and JAWS.

Piazza’s first test for the Baseball-Reference Hall of Fame actually has him missing the cut. The Gray-Ink Test measures how many times a player made top-10 appearances as a leader in batting or pitching stats. A player receives four points for home runs, RBI, or batting average, three points for runs scored, hits, or slugging percentage, two points for doubles, walks, or stolen bases, and one point for games, at-bats, or triples. Piazza totaled a score of 101, while the average Hall of Fame inductee has averaged a score of 144. But this category hurts modern players because it was much easier to be in the top ten when leagues were much smaller. This, however, is the only place where Piazza receives a failing grade.

Piazza passed the rest of Baseball-Reference’s tests with flying colors, starting with the Hall of Fame Monitor. This subcategory basically tries to show how likely a player is to make the Hall. This is not showing how deserving one is. The complicated equation gave Piazza an outstanding score of 207. How good of a score is that? A likely Hall of Fame player gets a 100 and a 130 is a sure-fire Hall of Fame player. Piazza scored over double of the likely lucky guy to walk the halls of Cooperstown as a smiling plaque forever. Piazza ranks 43rd all-time as far as being a likely Hall of Fame inductee goes. Only two players are ranked higher and have been retired from the MLB long enough to be enshrined into the Hall — Barry Bonds and Pete Rose.

For his Hall of Fame Standards, Piazza may be even more dominant, ranking 27th all-time with a score of 62. A likely player to be chosen to the Hall scores a 50. This statistic is used to show the overall greatness of a player, compared to someone with big peak years. In these terms, Bonds is the only Hall of Fame eligible player above Piazza who is not in Cooperstown.

Finally, we have JAWS, which is a player’s career WAR averaged with his seven-year peak WAR. Jay Jaffe’s JAWS shows Piazza as the fifth greatest catcher of all-time (51.2 JAWS) behind just Johnny Bench, Gary Carter, Ivan Rodriguez, and Carlton Fisk. All are in the Hall besides Rodriguez, who hasn’t been eligible yet. Of the 13 catchers voted into the Hall of Fame, Piazza trumps their average JAWS score of 43.1. 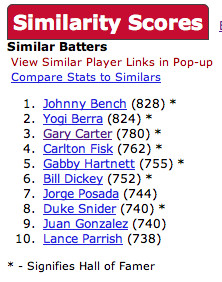 That’s right; despite the perception that Piazza was such a terrible defensive catcher, his most similar player is Johnny Bench. Of the ten players that Baseball-Reference compared Piazza to, seven find their names in Cooperstown, with a chance of an eighth in Jorge Posada.