Rose Bowl 2015: 5 Things To Watch In The Oregon Vs. Florida State Showdown 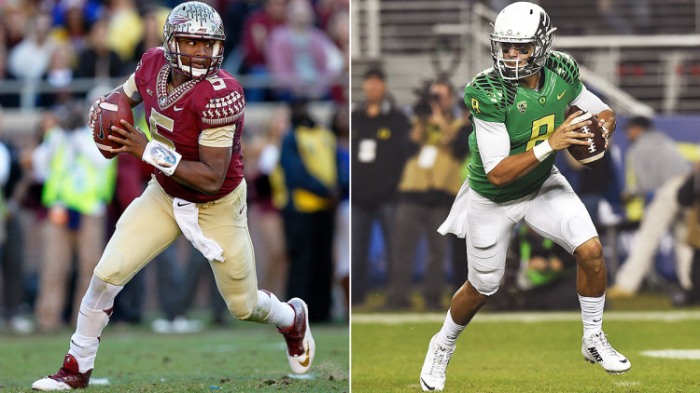 The inaugural college football playoffs are finally underway with the Rose Bowl as the first semifinal game between the No. 2 Oregon Ducks and No. 3 Florida State Seminoles. We know the obvious narrative of Jameis Winston, the 2013 Heisman winner, vs. Marcus Mariota, this season’s victor of the Heisman Trophy. This was the matchup that we all wanted to see. In the eyes of the public, it’s a perfect Good vs. Evil showdown.

The quarterbacks will certainly have the spotlights, but there’s much more to watch while viewing the Rose Bowl.

1. How Will Jameis Winston Start?

To be blunt, Florida State has not been a good first-half team. Not at all. The Seminoles trailed in eight regular-season games, while Oregon surprisingly trailed in seven regular-season games itself. The difference is, Florida State’s average margin of comeback in those games was 14.1 points. Oregon only had to come back from 7.1 points. Still, Florida Statealways wins. This isn’t some ACC team that the Seminoles can nap on in the first half, though. Oregon ranked third in the nation with 46.3 points per game. Florida State can be seen way down at No. 29 with 34.8 points per game.

A big reason why the Seminoles have to come from behind all too often is clearly because of Jameis Winston’s performance. By quarter, Winston’s stats make a big leap as the game goes on.

Dear Jabo, you better get to work early and often.

2. The Loss of Ifo Ekpre-Olomu

Oregon’s defense took a shocking blow when All-American cornerback Ifo Ekpre-Olomu tore his ACL in a practice leading up to the Rose Bowl. A one-on-one matchup of Ekpre-Olomu and Rashad Greene was highly anticipated and was an Oregon calling card to slow down Winston. Troy Hill, who is listed as an inch taller but 20 pounds lighter than Ekpre-Olomu, will line up as the No. 1 CB. His main job will be following Greene all around the field, who lines up inside and outside as a receiver. Accompanying him will be redshirt freshman Chris Seisay. Winston says it won’t change how the ‘Noles view Oregon’s defense, but c’mon, this will be a big matchup to keep an eye on.

Jalen Ramsey, Florida State’s nickel back, is the unheralded hero of the defense. Winston might be the “evil star” on offense, but Ramsey is just fine taking on the same role on defense. The 6-foot-1, 204-pound sophomore can do a little bit of everything. Well, a lot of everything as a matter of fact. On the season, he has totaled 75 tackles, 9.5 tackles for loss, 11 pass deflections, three sacks and two interceptions. Ramsey’s stats speak for themselves, but he’ll certainly be doing plenty of talking with the Ducks, too.

The Oregon Ducks have put together a different offensive line to protect Marcus Mariota every single week. All-American linemen have faced injuries, and freshmen have been forced to play much earlier than expected. Oregon’s All-American center Hroniss Grasu has missed the last three games but should be good to go for Thursday. Protecting Mariota’s blind side is left tackle Jake Fisher, who has made all the difference in the world when healthy. Fisher missed two early games to a leg injury, a loss to Arizona and the Ducks’ slight victory over Washington State. Mariota was sacked 12 times in those two games, compared to 14 times in the next eight games with Fisher back on the line.

For Florida State, Cam Erving and his willingness to change has made all the difference for the Seminoles. In 2013, Erving was an All-American left tackle for the national champs. In September, he was moved to center, and the results have been huge. FSU is ranked only 104th in rushing yards per game, but in their regular-season finale the Seminoles ran for 181 yards and backed it up with 179 yards against Georgia Tech in the ACC title game.

Jameis Winston likes to talk. Marcus Mariota does not. We know the stats and the accolades. Like anybody else, I can’t wait to see the two battle it out on the field in one of the most hyped matchups between college quarterbacks in football history. Another aspect that I can’t wait to  hear is their words.

Hear a difference? Clearly Winston is more comfortable speaking in front of everybody, but he also has a different choice of words. Winston said the word “I” 27 times, plus using his own name once. Mariota said the word “I” 10 times. In those 10 times, he said, “I am humbled,” “I wish you continued success,” “I love every single one of you,” “I’m truly grateful (three times),” “I hope each of you will take pride and understand that this is your trophy,” “… thank you for the countless life lessons that have shaped me into who I am today,” “… thank you for teaching me humility and respect, two aspects of my life that I will never change,” and “To the Polynesian community, I hope and pray that this is only the beginning.”

Winston finished his speech by saying, “It means so much to me, but I’ve got one thing to say: At Florida State, if we’re going to do it then, we do it big then.” Mariota, on the other hand, finished by saying, “Fa’afetai tele lava [thank you very much]. God bless, and go Ducks.”

Words will be spoken by the two, but in the end, their play will roar.

Like Loading...
‹ Unleash The Beast: Leonard Fournette Is A Sprinting, Bulldozing Nostradamus
Why Tim Raines Should Be Inducted Into The Hall Of Fame ›