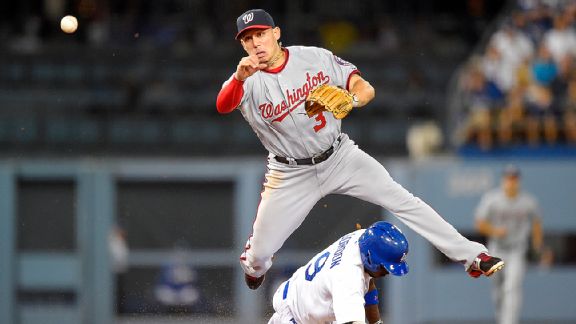 *This column was originally posted on SB Nation’s Amazin’ Avenue.

The biggest question of the New York Mets‘ offseason has been clear from the start: Who will be the everyday shortstop for the 2015 season?

Dream scenarios have been thrown around with the oft-injured Troy Tulowitzkiwearing a Mets jersey, but no matter how bad Joel Sherman wants him, the chances that the Mets front office trades for the power-hitting shortstop are remarkably slim. On the free agent market, a star shortstop may not be there. However, viable options for a sliver of Tulowitzki’s contract are still available.

So, who are the most realistic shortstop options for the Mets heading into the 2015 season?

The Mets are still undecided on the Korean star and bringing a player overseas is always a risk, even with staggering numbers like Kang posted in 2014 for the Nexen Heroes of the Korean Baseball Organization. In 2014, Kang had an MVP-type season in the KBO, hitting .356 with 40 home runs and 117 RBI in 117 games, but he’s a risk both financially and with respect to how well those numbers will translate to Major League Baseball. Kang is known to be seeking a contract in the three-year, $24 million range, but after posting fees he could cost $30-$40 million or more. No shortstop on the free agent market presents more upside offensively than the 27-year-old Kang, yet he may be the riskiest option as well.

Cabrera may not be the All-Star shortstop that he was with the Cleveland Indians, but he is still a viable option that can also play multiple infield positions. After being traded to the Washington Nationals last season, Cabrera saw the bulk of his playing time at second base. Combined between the Indians and Nationals, Cabrera hit .241/.307/.387 with 14 home runs. He still has above-average power for a middle infielder, and his positional versatility and ability to hit from both sides of the plate make him a useful player.

Drew was awful in 2014. It’s as simple as that. After having a compensation draft pick kill his value last year, Drew signed midway through the season and only played in 85 games between the New York Yankees and Boston Red Sox. He combined to hit just .162/.255/.328 with seven home runs. Why would this signing make sense after such a disaster of a season? The magic one-year contract. Drew is likely to sign a one-year deal to redeem himself, and getting a full season under his belt should produce much better results than 2014 did. Signing Drew to a one-year deal makes sense for the Mets with options like Ian Desmond being a free agent after the 2015 season and Alcides Escobarhaving a $5.25 million club option and $500K buyout.

In 2014, Bonifacio played all three outfield positions, second base, third base, and shortstop for the Chicago Cubs and Atlanta Braves. Essentially, Bonifacio is the perfect sixth man for a championship basketball team. Going into his age 30 season, the ultra-utility man still has plenty of value with his bat, too. In 110 games last season, Bonifacio hit .259/.305/.345, and though he only launched three home runs, speed is still an asset with 26 stolen bases in 2014. He may not be the No. 1 option for an everyday shortstop, but Bonifacio brings value, production, and versatility that many players in the league don’t.

Yes, it’s quite possible that the Mets go into the 2015 season with Flores and Tejada as their top shortstop candidates. Flores, only 23 years old, hasn’t shown a lot of promise early on for the Mets. In 78 games last season, Flores hit .251/.286/.378 and added minimal power with six home runs. Tejada, 25, wasn’t much better. Last season he hit .237/.342/.310 with only five home runs. The upside of Tejada’s batting line is his higher on-base percentage compared to Flores, but neither are ideal options, with limited power and no speed to make up for it. This scenario is the last that Mets fans want to see, but is still clearly within the realm of possibility.

Since Jose Reyes left the Big Apple, shortstop has seemed to be one giant question mark for the Mets. Will they take a risk and spend money on the possible power of Kang? Will they sign a proven veteran like Cabrera? Or go for a one-year contract with Drew, making way for the possibility Ian Desmond signs with the Mets next offseason? The options are still out there, as are the question marks.

Like Loading...
‹ Can Barry Zito Make A Comeback In 2015?
Who Will Play Third Base For The San Francisco Giants? ›