Billy Sims, Barry Sanders And The 2 F’s Of Thanksgiving: Family And Football 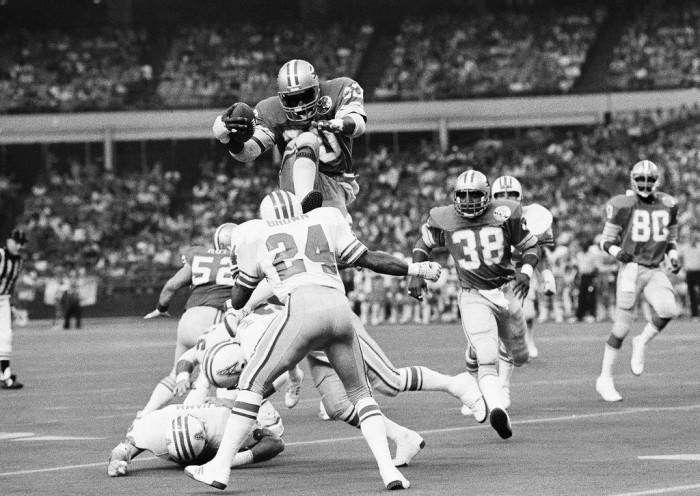 For one night — well only one night for most of us — we spend time and money looking like pirates, zombies or, of course, cats and wake up the next morning with either a hangover or one angry stomach from a candy overload. Let’s be honest, a combination of the two isn’t out of question, as well.

Another odd thing happens the next day after Halloween: Christmas arrives nearly two months too early. Our TVs are full of advertisements, Christmas trees begin to fill windows and overweight bearded men line up to be the next creepy Santa at your local mall. Essentially, we turn from one holiday filled with commercialism to the next. In between these two materialistic holidays is the unforgotten, yet less loved, Thanksgiving.

We know that both Christmas and Thanksgiving are meant to be days filled with family time, but I’ve yet to see people rush in their pajamas to open presents around a giant decorated turkey. Maybe we need to start mauling each other in the middle of a Walmart the night before Thanksgiving trying to grab our most desired turkey in order for the holiday to get the same recognition as Christmas.

The two aspects that come together on this day when we let loose on our eating habits and make sure our pants are just as loose are family and football.

I think of my dad, whose Thanksgiving memories growing up were the two F’s of this exact narrative: Family and Football.

“Besides my mom’s great cooking, my biggest memories of Thanksgiving are watching Billy Sims run wild for the Lions. No matter what kind of a season the Lions were having, they’d always put on a show. It was Billy and on to Barry,” my father told me about his memories of the two great Detroit running backs putting on Thanksgiving performances for us to watch.

Growing up, my father, who played running back in high school and college, constantly spoke about Walter Payton or Barry Sanders. The second Lions star carrying the rock after Sims was perhaps the MVP of Thanksgiving football. For his career playing on the holiday, Sanders ran for 931 yards on 210 carries, averaging 4.43 yards per carry in 10 games. The Lions went 7-3 in those games. Sanders was a human pinball on skates, bouncing off his tacklers and scooting by them as they gave thanks that there was no Vine or YouTube in those days.

I think back to 80 years ago and a different Detroit Lions team making Thanksgiving day history. Thanks to George A. Richards, a local Detroit radio executive, the Lions played the first ever NFL game on Thanksgiving 1934 against the Chicago Bears, who were the reigning world champions. The game sold out in two weeks after it was announced and became an instant classic, with the Bears coming out victorious in a 19-16 final. Besides a break from 1939 to 1944, the Lions have been a staple of Thanksgiving day football ever since.

Fast-forward to 2007, and the Lions of Sims and Sanders come back into play. That year was my first on the varsity football team at Petaluma High School as a sophomore, and I decided to wear No. 20, while knowing I would never play a down at running back. Maybe it was the stories of Sanders that my dad explained to me like an epic cinematic experience, but the No. 20 had a special feel to me when it came to football. Ironically, my best friend who played running back decided to drop Sanders’ zero and sport the No. 2, possibly because he never ran for negative yards, but hey, I don’t remember Sanders doing so either.

Two years later as a senior marked my brightest memory of Thanksgiving and football. With the fog and early morning dew of Northern California covering the outfield grass of the baseball field that we practiced on, football on Thanksgiving was the official sign of an unforgettable season. In our sweatpants and shells — shoulder pads and helmets — we all pretended to be morning people in order to perfectly run the triple option before stuffing our faces later in the day. What stood out the most from that practice wasn’t my teammates and I in our purple mesh practice jerseys, but the family that walked down to the game field to play their own two-hand touch, Turkey Bowl football game. I wasn’t jealous of the family, because football practice on Thanksgiving was something we all worked months for, but the image stood out to me. That was Thanksgiving to me right there. Family and football coming together, painting one beautiful picture seen clearly through the fog.

I think of my mother. If my dad’s the head coach who taught me all that I could know about sports, my mom’s the general manager of the family. No matter what she has to do, no matter how much she’s had to work for different jobs throughout the years, she brings the team together, looking to create a championship franchise.

I think of those who are family, no matter if there’s no blood relation or if that family member happens to wear a collar. My dog Scoot, who was with us for nearly 15 years, fell asleep for the long haul less than a week ago. He certainly was no Air Bud and didn’t know the word “fetch,” but he did know the word “turkey” and would have been glad to help us with the leftovers of the bird. Family.

I think of my hero Tom Francois spending Thanksgiving in a hospital bed after the doctors found a tumor on his kidney, when he was rushed to the hospital for an aneurism he experienced from a cadaver vein bursting that was used for his right leg amputation in 2001. The tumor was benign, and Tom spent Christmas out of that hospital bed and back with his family.

It doesn’t matter if I have family on the streets or behind bars, our head coach and general manager will help bring us together to enjoy that delicious food from my grandmother that my father spoke about earlier. I can guarantee that after we stuff our stomachs and loosen our jeans, the Lions versus Bears game will be on the same TV in my grandparents’ living room that we’ve had to squint at since I can remember, if the game wasn’t insanely on at 9:30 a.m. here in California. Family and football.

While we might unwrap a copy of Madden NFL 15 on Christmas that was purchased for $60 and dominate football on the sticks, finding the perfect team in your family to sling the ball around in your version of a Turkey Bowl will more than likely prove to be priceless, or at least greater than the suggested retail price.