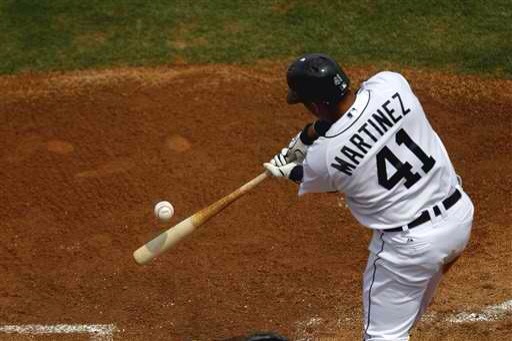 When Prince Fielder was traded to the Texas Rangers in the offseason, a big concern was the unknown of who would protect Miguel Cabrera. Fielder has regressed the last two seasons, but Cabrera did win back-to-back AL MVP awards and a Triple Crown with Fielder protecting him.

The replacement for Fielder was DH Victor Martinez and he is off to a historic start to his season. Through May 21 and 161 at-bats, Martinez is hitting .311/.363/.571 with 12 home runs. Here’s the crazy part: Martinez has only struck out 11 times, starting his season off with a rare stat line of more home runs than strikeouts.

In 2011, Baseball Reference conducted a list of the 45 players that have hit at least 20 home runs in a season and hit more home runs than strikeouts, from 1925 on.

* Johnny Mize has the most home runs in a season on the list with 51 and just 42 strikeouts.

* Joe DiMaggio is the king of the feat, doing it seven times.

* Yogi Berra and Ted Kluszewski did it five times.

* Ted Williams and Lefty O’Doull did it three times.

* Lou Gehrig did it twice.

Martinez is only eight home runs away from 20, so he has a chance to join this rare company, but having less strikeouts than home runs in today’s game that values power over putting the ball in play in many ways seems nearly impossible.

Like Loading...
‹ Finding a balance between Traditional Baseball and Sabermetrics
D2 Diaries: How To Handle The Long Bus Ride ›