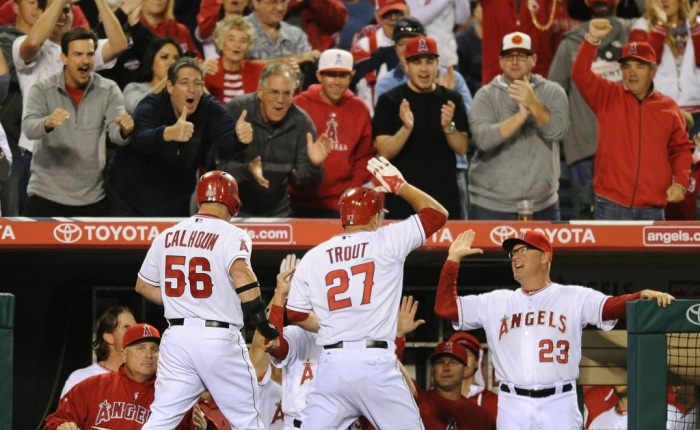 *This column was published in The Inkwell and on its website.

America’s pastime won’t be a holiday anytime soon, no matter how many people sign a petition to make baseball a national holiday. But, opening day still felt like Christmas morning. Sunflower seed sales went to the moon, overpriced beer was drank, and ridiculously-huge-and-fattening-yet-delicious ballpark food was eaten. All of the above reminded us why baseball is America’s game.

With the first games in the books, fans are bragging to their buddies about how great their team is or acting like their dog died. Along with giddy fans, there are plenty of predictions on the season with many being far from correct. Here’s an ode to joining the crowd, with predicting this season’s award winners.

For the past two seasons, Mike Trout has been the best player in baseball, at 20 and 21 years old. Despite this, he has been beaten out from winning the MVP by Miguel Cabrera both years in a row. Trout, who just signed a six-year, $144.5 million extension, is shattering records. He is the exact definition of a five-tool baseball player. No other player in modern MLB history has hit at least 60 home runs and stolen 60 bases through their age-21 season. Through the past two years, Trout leads baseball by reaching base 564 times and leads with a 20.1 WAR. He’s worth more wins than any other player in baseball. And he’s 22 years old.

Trout is a $144.5 million bargain, which just sounds downright dumb, but is easily true. On the night he signed his contract he blasted a home run. Then, in his first at-bat on opening day, he hit a home run off of Felix Hernandez. Just stop it. But please don’t.

Phenoms rejoice! If a 22 and 21 year-old win the MVPs in baseball, we will truly be watching a special season. In this case, that’s exactly what would happen. Harper has been a forgotten face with Trout taking over baseball, despite the fact he was considered baseball’s “Chosen One” by Sports Illustratedat just 16 years old. He’s been an All-Star at 19 and 20 years old and could truly break out in his 21 year old season.

Baseball Reference has Harper compared to both Ken Griffey Jr. and Mickey Mantle through their age 20 season. Both Hall of Fame players saw an increase in numbers the next season, and Harper could follow the elite duo. The Washington Nationals are a prime playoff candidate and Harper can lead them to the playoffs and an MVP with a .300 batting average, 30 home runs, and 100 RBI season.

Voters have shifted away from win totals in looking at the Cy Young award. This greatly works in the favor of the Chicago White Sox ace Chris Sale. The long, lanky lefty is one of the most impossible pitchers to hit in baseball. What hurts him is playing for the White Sox, who are in an interesting spot of rebuilding, but trying to contend still. He had 14 losses last season, but still finished fifth in Cy Young voting with a 6.9 WAR and 226 strikeouts. Look for him to have around a 2.70 ERA en route to a Cy Young.

Fernandez makes the Miami Marlins fun to watch. No matter how many games they lose, people will watch when he pitches as he dazzles every time he fools a hitter. In his rookie year at 20 years old, Fernandez went 12-6 with a 2.19 ERA, won the NL Rookie of the Year, made the All-Star team, and finished third in the Cy Young voting. He became a man much younger than most trying to leave Cuba and constantly getting arrested in doing so, and now plays the game with a smile and a devastating repertoire of pitches. We’ll be watching him on the bump for a long time, and this could be his first of many Cy Young’s.

There are plenty of solid options with Masahiro Tanaka and Xander Bogaertsheadlining this rookie class, but Ventura is the name to watch here. The Kansas City Royals are primed for a breakout season and their breakout star will be a 22-year-old rookie that was named the No. 3 starter in the rotation. Ventura is not the typical big pitcher, but he hits triple digits and has been given the trust of the Royals’ front office to be atop the strikeout leader board in the AL.

Billy Hamilton is a popular pick here for his blazing speed, but I just don’t know how well he will hit as a rookie. With Wong and the talent around him in the Cardinals lineup, I believe Wong will have a solid season. He only hit .153 in limited time last year, but hit .375 this spring. He could easily hit towards .300 and be a key to another World Series run.

There is a plethora of stars on this list. Most notably, there is Derek Jeter andPujols’ teammate Josh Hamilton. Pujols only played in 99 games due to plantar fascists last season and just hit .258 with 17 home runs. He is already a Hall of Fame hitter, but hasn’t played to hit monster contract with the Angels. This spring, Pujols hit .321 with a homer and seven doubles and he should come back somewhere toward his old numbers if healthy.

Castro made back-to-back All-Star teams in 2011 and 2012, looking like the face of the future in Chicago. Last season, he hit just .245 with only 10 home runs. At just 24 years old, Castro still has plenty of time to shine. He’s a natural hitter and should hit near .300 with around 200 hits for the lowly Cubs this season.