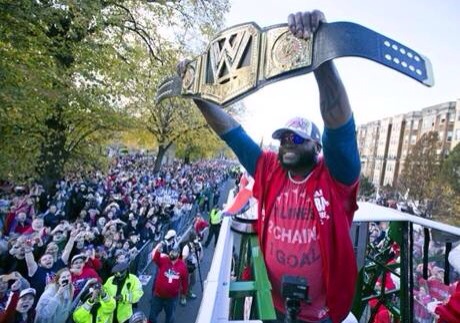 *This column was originally published in The Inkwell and on it’s website.

Ellen Degeneres posted the most famous selfie on Twitter ever, Jennifer Lawrence fell again and Leo lost… again. Is it not weird that Leonardo DiCaprio is one of the most underrated actors ever, yet gets an overrated label all too often? The 86th Academy Awards were full of highlights and one of the most plentiful groups of movies trying to take home the Oscar for Best Picture.

The sporting world also took place in the Oscars without even having a sports-themed movie nominated, thanks to John Axford.

Axford, beginning his first season as a reliever for the Cleveland Indians, started spring training in perfect fashion. Well, in picking the Oscar winners that is. He went 18-for-18 picking the award winners, after correctly picking 14 of 15 award winners in 2013. Axford didn’t completely get every award right as he didn’t attempt at picking Production Design, Sound Mixing, Sound Editing, Animated Short Film, Live Action Short Film and Short-Subject Documentary. After throwing an Oscar-perfect game, Axford tweeted, “I’m pretty sure this means I have to do all 24 categories next year! #Oscars #18for18.” Don’t let us down Mr. Nostra-ford.

With the loss of a sports movie hitting the Oscars, here are the Oscar winners for the sports world in an age of too many forgettable sports films.

Best Picture: Coming to a theater near you, “This Is Our F***ing City!” The story of the 2013 World Series champion Boston Red Sox is a surefire box office hit, with drunken Bostonians cheering and cursing during the whole movie. With the beards of Jonny Gomes and Mike Napoli, and add in David Ortiz, Dustin Pedroia, Shane Victorino, Jon Lester, John Lackey and Koji Uehara and an Oscar is in the books. The Red Sox went from worst to first, and won a World Series with stars and scrappers, when the city of Boston needed them most during the Boston bombings.

Director: The young, deep Seattle Seahawks are led by the third youngest general manager in the NFL, John Schneider. The moves Schneider made to form Seattle’s roster won them a Super Bowl, with tactics like selecting 5-foot-11 quarterback Russell Wilson with the 12th pick of the third round in the 2012 draft. Wilson threw for 3, 357 yards and 26 touchdowns to just nine interceptions in his second year in the NFL. Perhaps the biggest acquisition of last season was Seattle trading for Percy Harvin for a plethora of draft picks. Harvin was almost never healthy, just playing in 33 snaps before the Super Bowl, but he returned a kickoff for a touchdown and had two carries for 45 yards while catching one pass for five yards. Schneider also drafted Richard Sherman and built the young Seattle defense.

Lead Actor: This is my vow for LeBron James to do “Space Jam 2.” LeBron doesn’t have as many championships as Michael Jordan and he hasn’t even participated in a slam dunk contest. If he joined Bugs Bunny in this epic sequel, he could at least be in same category for film with Jordan. Even without doing the sequel, LeBron wins the award for his marvelous MVP and championship season while perhaps being the best athlete in the world. To put the cherry on top, he is the best flopper in the league, giving him high acting credentials.

Lead Actress: “Rowdy” Ronda Rousey is the face of women in the UFC. She can’t be stopped and right now nobody knows who will challenge her. Rousey, at 5-foot-7 and 135 pounds, is 9-0 in the UFC. She became the first UFC women’s bantamweight champion and still holds the title today. Her last fight lasted all of 66 seconds at UFC 170. Not only is she dominating in the ring and a powerful figure for women in sports, but she is in line for two upcoming films, including the “Entourage” movie.

Supporting Actor: Time for a curveball. Could the winner be someone who was traded during the offseason just two years after signing a nine-year, $214 million contract? Yes. And this player is Prince Fielder, even after having a “down year.” Fielder played two seasons for the Detroit Tigers, making the All-Star team in both seasons and Miguel Cabrera won the MVP both years. The first baseman also did not miss a single game during his time in Detroit. In 2013, Fielder hit .279/.362/.457 with 25 home runs and 106 RBIs during his “off year.” For being overly scrutinized, Fielder deserves recognition and look for him to have a big season for the Texas
Rangers.

Supporting Actress: Many people saw Lolo Jones as an act, and felt others deserved to be on the USA bobsled team in the 2014 Winter Olympics. Act or not, Jones made Team USA with little experience and the achievement alone is impressive. However, she was not on the top USA team, and ended up placing 11th in Sochi. Jones did win a gold medal in 2013 for bobsledding at the mixed team event at the 2013 World Championships. She did all this after being a track star for years, when she last placed fourth in the 100 meter hurdles at the 2012 Summer Olympics.