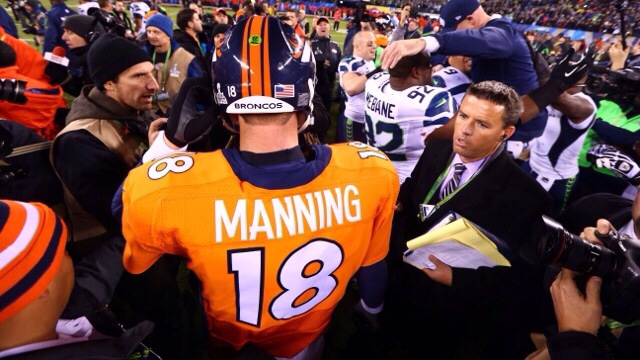 This column was originally published in The Inkwell, and on its website.

The best offense in football versus the best defense in football. Peyton Manning looking to seal the deal on the greatest statistical season ever by a quarterback against a 5-foot-11, third-round pick quarterback in Russell Wilson. Denver’s fearsome foursome of receiving options versus the “Legion of Boom.” Nobody saw this coming. Nobody.

What was hyped to be one of the most even and exciting matchups in Super Bowl history ended up being one of the biggest duds. The Seattle Seahawks thrashed, harassed, and dominated Peyton Manning and the Denver Broncos to cruise to a 43-8 victory and Seattle’s first Super Bowl victory in franchise history.

In the same fashion that Seattle’s defense has shown all year long, they exerted their heart and will against the Broncos in every way possible. From literally the first snap of the game, the Seahawks owned the game. While trying to perform an audible, the first snap flew past Manning and into the back of the end zone for a safety. Seattle’s defense: 2, the Denver Manning’s: 0.

After the safety came a Manning interception. Then another one, this time for a touchdown. Predictably and annoyingly, the tweets of Manning being a choker in the playoffs popped up and his legacy would again be the talk of SportsCenter. Let’s get one thing straight: Peyton Manning’s legacy as one of the greatest quarterbacks ever, and possibly the greatest, was sealed many years ago.

Manning now has an 11-12 playoff record, giving him the most playoff losses by any starting quarterback in NFL history. His 24.4 total quarterback rating was his lowest of the season and the lowest in a Super Bowl since Rex Grossman’s 7.1 in 2006.

After the game in one interview, Manning was asked to name his three greatest quarterbacks in history, handling the question with humbleness and humor.

The punch line drew laughter after one of the most scrutinized points in Manning’s career. His witty sense of humor and ability to get out of a sticky question much quicker than any 40-yard dash he’s ever ran is just part of the legacy Manning has built as more than just a player.

Two years ago, there was serious worry that Manning’s NFL career had come to an end. After multiple neck surgeries, the quarterback missed an entire season. He was then let go by the Indianapolis Colts after 14 seasons, so the team could draft his successor, Andrew Luck with the No. 1 pick in the draft.

Denver ended up being Manning’s destination after visiting with multiple teams — including the Seahawks — and he has continued to grow his legacy as one of the greatest passers ever with the Broncos. Manning has led the Broncos to back-to-back 13-3 regular seasons to win the AFC West in both seasons.

Last season, the Broncos lost to the eventual Super Bowl champion Baltimore Ravens in the playoffs, on a blown play by the defense, but again the loss was credited to Manning. This season, Manning re-wrote the record books. Manning threw 55 touchdowns to break Tom Brady’s record of 50, threw for 5,477 yards to break Drew Brees’ record by one yard, had nine four-touchdown games to beat himself and Dan Marino with six, 15 two-touchdown games to tie Marino’s record, tied Marino with four 400-yard passing games, and tied his record of 15 90+ passer rating games. He also won a record fifth MVP award, which is two more than any other player in NFL history. All of this was at 37 years old with a bum neck and a bad ankle.

After the game, Manning found Seattle’s star cornerback Richard Sherman, who left the game on crutches from an ankle injury in the fourth quarter, to make sure he was feeling alright and wasn’t seriously hurt. Sherman has been in the news recently for his rants and calling out players, but had the upmost respect for Manning, calling it “one of the greatest moments of his life.” Sherman tweeted: “Peyton is the Classiest person/player I have ever met! I could learn so much from him! Thank you for being a great Competitor and person” (sp). After his defeat in the playoffs last season, Manning went to Baltimore’s locker room to shake Ray Lewis’ hand and congratulate him.

Another Super Bowl would have looked nice on his Hall of Fame plaque, but Manning has done more for football than people will ever appreciate. Rarely does an athlete change a sport the way Manning has with football. He turned the quarterback into a coach at the line, dissecting the defense. People will look at his playoff losses and say he does not have the clutch gene, yet he led his team to the playoffs that many times in the first place. Manning resurrected the Indianapolis Colts by exceeding expectations as the No. 1 pick and won a Super Bowl for the franchise, and two years after he missed an entire season, Manning led another team to the Super Bowl.

Quarterback is the one position where a loss is completely your fault. What about Denver’s defense that let Russell Wilson pick them apart? What about Denver’s special teams that looked like a bunch of bull fighters yelling “Ole!” as Percy Harvin ran right by them? And what about the ref catching Joe Namath’s botched coin toss that could have made the Seahawks start off with the ball? Conspiracy theorists rejoice!

Enjoy Peyton Manning while you can. At his age and health, his career can end quicker than anyone hopes. His legacy as a quarterback and humanitarian for football is unprecedented.