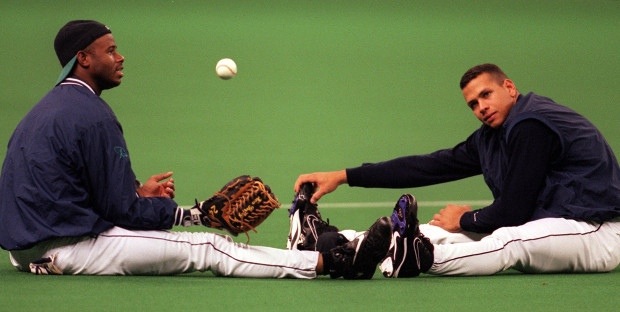 Voting Gone Wrong is based on major awards being wrongly voted to the wrong person based on performance.
*Suspected PED use will not affect voting.
*The Baseball Writers’ Association of America has no specific requirements for MVP voting.

Advanced offensive and defensive statistics were rarely used in the ’90’s. Typically, evaluators would use the straight slash line (batting average, on-base percentage, slugging percentage) along with power numbers of home runs and RBIs. When looking at more advanced stats and taking away team records, the award really came down to a pre-steroid and pre pre-Madonna Rodriguez and Griffey. The two Seattle stars dominated the league.

A-Rod’s 1996 campaign is one the most impressive seasons in baseball history. Many believe that this is the year that he got robbed of his first MVP season. At only 20 years old, Rodriguez played a premium position of shortstop, led the league in stats across the board and had a 9.3 WAR, making advanced statisticians go crazy. The old-school stats and advanced stats are beyond impressive. In the advanced column, Rodriguez was 101 runs better than a replacement player, he accounted for 8.4 offensive wins above replacement, and 1.7 defensive runs above replacement. All of this was in Rodriguez true first season as an everyday player. He was an All-Star and won the Silver Slugger.

Ken Griffey Jr. also played a premium position in center field, while batting third in the Mariners lineup. That season, Rodriguez batted second, Griffey Jr. third, and Edgar Martinez fourth. Griffey was an RBI machine, knocking in 140 runners, and many times one of the runners was Rodriguez, which helped him lead the league in runs. In Seattle’s lineup, Griffey was also the most feared hitter, as he was walked 19 more times than Rodriguez and was intentionally walked 13 times compared to A-Rod’s one.

The advanced statistics show how greatly Griffey dominated both offensively and defensively. Griffey’s 9.6 WAR was a career high and the highest in the AL (Barry Bonds had a 9.7 in the NL). His 103 RAR was a career high, .552 waaWL% was a career high, and ’96 was his greatest defensive season with a whopping 3.4 dWAR. The smooth center fielder’s second best defensive year came in his ’97 MVP campaign year with a 1.8 dWAR. That season, Griffey was an All-Star, won the Silver Slugger, and also one of his 10 Gold Glove awards.

While many see this as the year that Rodriguez was overlooked, it was another Mariner that deserved to win the ’96 AL MVP, though he wrongly finished fourth in voting. Through both classic and advanced stats, Ken Griffey Jr. was the best overall player in the AL. He should have took home his first MVP in ’96, but luckily a year later he had another huge season and won his only MVP award.

*All stats were through Baseball Reference.