The public world of the Hernandez, Lloyd murder case

While gut-wrenching murders happen every day, the murder case of Odin Lloyd has taken primetime news for nearly a month. Former New England Patriots star tight end Aaron Hernandez, now reportedly admitting to killing Lloyd, has been at the heart of the media.

Other sad murders do not get half the attention Hernandez has received and Lloyd has not received much attention at all.

The public social media world of today has given this case a perfect combination of “The Good, The Bad and The Ugly.”

No murder has any good, but the New England Patriots did a worthy act for their fans who once supported Hernandez by donning his jersey. On July 7th, fans flocked to the Patriots pro shop at Gillette Stadium and by 5 p.m., nearly 1,200 fans exchanged their Hernandez jersey for another Patriots jersey.

The jersey materials will be recycled and not sent to a foreign country.

To pay tribute to Lloyd, and keep Hernandez out of the spotlight for one second, Yahoo! Sports reporter Eric Adelson, wrote a fantastic piece of Lloyd’s life as a 27-year-old semi-pro football player for the Boston Bandits. Lloyd was described as “liked by teammates” and had to buy his own helmet.

Any public support of Hernandez, is no good support. Snoop Dogg or Lion or Tree, whatever you want to call him now, showed an unwarranted amount of support for Hernandez via Instagram. The caption reads, “Keep ya head up !! We prayn 4 ya.” Snoop has massive amounts of fans and followers who see this photo. Support for the rapper and Hernandez were seen in the comments.

The photo received over 22,000 likes, but most comments were critical against Snoop and Hernandez. However, one fan did mistake Hernandez for George Zimmerman. 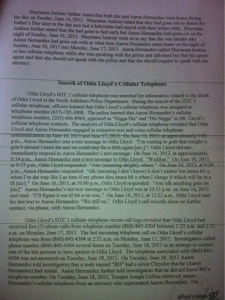 ESPN has been on the Hernandez case like Tim Tebow just said his first curse word, and rightfully so. But, when video of where Hernandez might stay in jail becomes newsworthy, the story is starting to go too far. The network also has done little to nothing on Lloyd, his family or his football team.

Gabe Ballou of The Boston Globe tweeted a photo of Hernandez and Lloyd’s last text conversation. The photo reveals Hernandez’s phone number, which I tried to call and went straight to a voicemail that “hasn’t been set up yet,” Lloyd cell phone number that also went straight to voice mail and other numbers all well.

A man who has tragically died has his last text conversation with his eventual suspected murderer and it’s ok since Hernandez was once a football star? The answer should be no, but unfortunately is not in our social media world.