Home › Sports › Will B.J. Upton be sent to the minors?

Will B.J. Upton be sent to the minors? 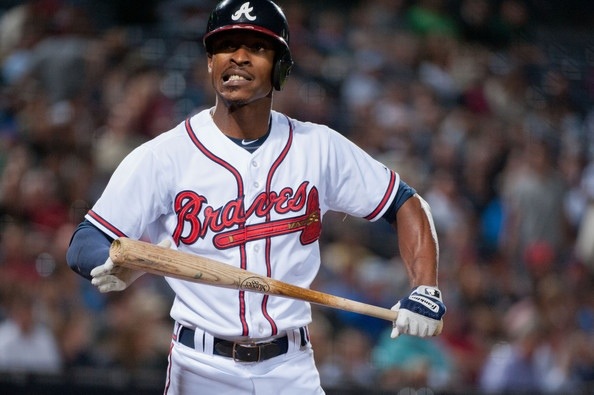 After signing the biggest contract in Atlanta Braves history, B.J. Upton’s nightmare of a season could wind up in the minors.

Upton signed signed a five-year $75.25 million contract this offseason, and the Braves envisioned a future star outfielder that could finally live up to his potential in the prime years of his career. Instead, Upton has his .146 with 35 percent strikeout rate.

Braves manager Fredi Gonzalez told reporters he did not have a timetable on when a possible minor league assignment would happen:

“It’s a hard decision,” Gonzalez said. “It’s a decision that you take very, very seriously. You talk collectively with your coaches about it, and it’s something always falls on my shoulders, right? That’s fine. I’m comfortable with that. But you’ve got to think about 25 (players), six staff members, four clubhouse guys, the front office and the fans.”

With Evan Gattis emerging as a breakout player, it’s hard to put a struggling Upton in the lineup over Gattis. In his rookie season after a roller coaster road to the majors, Gattis is hitting .281 with 12 home runs. His natural position is catcher, but with a healthy Brian McCann, Gattis can keep his own in left field.

Upton has been credited with showing up four hours early to take extra batting practice with struggling teammates Dan Uggla and Jason Heyward. The work ethic is a good sign, but until a swing change and results are seen, Upton cannot be relied on.

The Braves knew they were adding strikeouts to a team that already had plenty of strikeout hitters, but they did not know it would be at this rate.

While he has shown advanced skills and been labeled with “potential” his whole career, Upton has get away from the “potential label” and prove to be worth the money. His swing has too many late movements with his hands and feet and a change must be made.

Upton can refuse to take a minor league assignment and most likely will. A move down to the minors can either let him refocus and find his swing or make Upton over-think and continue to struggle.

Whether it’s a minor league assignment or not, Upton has to make changes and simplify his swing.