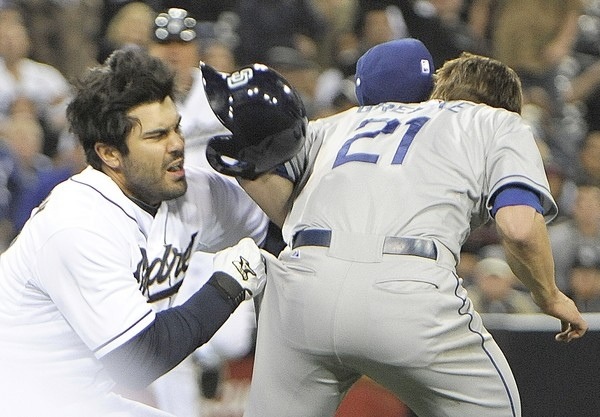 Carlos Quentin said, “It’s a man’s game,” but unfortunately he acted far from a man when Zack Greinke hit him in the arm with a 3-2 pitch in a 2-1 game. History aside, where Greinke has hit him in the hand and back, do you really think that is the situation where Greinke is trying to hit you? The thought is just dumb baseball logic and resulted in the Dodgers’ $147 million investment breaking his left collarbone in the brawl.

Dodgers manager Don Mattingly had some strong words on Quentin and its hard to argue with him: “That’s just stupid is what it is. He should not play a game until Greinke can pitch. If he plays before Greinke pitches, something’s wrong. He caused the whole thing. Nothing happens if he goes to first base.”

Greinke mouthed something at Quentin when he stared at him and started walking towards him, but that is far from unusual and not an excuse for Quentin. He weighs 240 pounds, stands with his left arm hovering over the plate and has broken records for being hit. In only 86 games played last season, he led the National League with 17 hit by pitches. Act like you have been there and take your base as the tying run in the sixth inning.

The history is there with this being the third time that Greinke has hit Quentin. Again none of those times have been directed towards his head. Nick Blackburn has hit Quentin four times surpassing Greinke, and Erik Bedard and Jon Lester have each hit him three times as well.

Retaliation and throwing inside at a batter is a part of baseball. The pastime will not change and bench-clearing brawls may not too. These occurrences happen for a reason and if handled the right way, are fine to stay. In this case, the baseball logic was not there and was handled in the wrong way.

However long Greinke is out, he will clearly be a big loss to the Dodgers. Their abundance of pitching has been a topic for a long time now and we will see how deep they really are. Chris Capuano is the most likely to take over for Greinke while he is out.

If you want to be a man than think again about your actions Carlos Quentin. Congratulations on injuring a pitcher that weighs 50 pounds less than you. Take your base, raise your on-base percentage and try to win a game.

The next 15 game that the Dodgers and Padres play each other will certainly be interesting.