Home › Sports › Wild Weekend of Sports: The BCS Gets Quacked Up

Wild Weekend of Sports: The BCS Gets Quacked Up 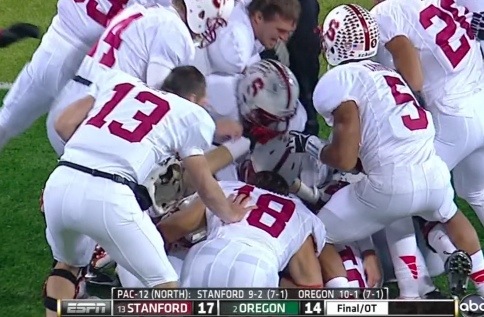 * No.1 Kansas State was trounced by Baylor 52-24. In the parking lot Optimus Klein transformed into a run down Chevy Pinto. Bill Snyder hopped in and played “Everybody Hurts” all the way home.

* No.13 Stanford defeated No.2 Oregon 17-14 in overtime. After the game, Chip Kelly petitioned a new rule to just throw the ball through the uprights instead of kicking field goals in college football.

* No. 17 beat No. 18 USC and Matt Barkley left the game with a separated shoulder. Lane Kiffin had a quick, but strange press conference when he simply said, ” The Mayans were right,” and then slipped out the back door.

* Johnny Manziel became the first freshman in college football to pass for 3,000 yards and rush for 1,000 in the same season. After the game he didn’t want to talk about the accomplishment though. “I want to talk about my kick. Just to clarify, I wasn’t trying. Back on the school yard they called me Johnny Kickball. Johnny Football out.”

* The Arizona Cardinals blew a 10-0 lead to lose 23-19 to the Atlanta Falcons. Luckily, Larry Fitzgerald appointed himself quarterback so he can get himself the ball.

* Andrew Luck looked like a rookie when he threw three interceptions in the Colts 59-24 loss against the New England Patriots. At least he had a good excuse: “Man I had a long night. I hope you’re all Kevin Hogan fans now.” Luck gave the reporters a wink as he put eight fingers up.

* The Washington Redskins broke their winless streak against rookie quarterbacks thanks to a flawless four touchdown performance by fellow rookie Robert Griffin III. RG3 thanked Jerry “The Rev” Harris for his performance. “This one’s for you Rev! I hated Sunshine.” Poor Nick Floes’ golden locks.

* Brad Keselowski aka The Skinny Ricky Bobby finished 15th at Homestead-Miami Speedway to earn his first Sprint Cup championship. With his earnings he’s decided to hire a personal speaker so he can have more time to drink Miller Lite.