Home › Sports › Wild Weekend of Sports: The Attack of the Ducks and… Roll Tide!

Wild Weekend of Sports: The Attack of the Ducks and… Roll Tide! 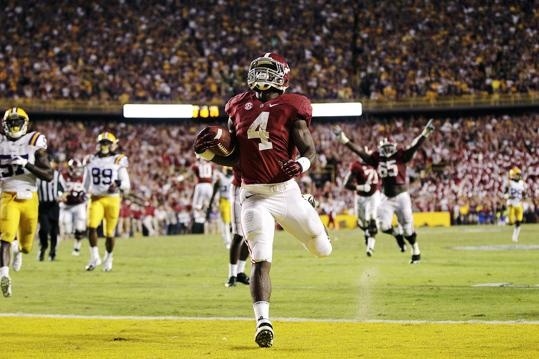 * Kenjon Barner ran for 321 yards and five touchdowns in the Oregon Ducks’ 62-51 victory over USC. After he broke La Michael James’ school record, Barner turned to James on the sidelines and said, “How’s San Francisco? Thanks for the record LaMike.”

* In a battle of SEC power-house football, AJ McCarron led Alabama to a game-winning drive to beat LSU with 51 seconds to go. After the game, Nick Saban decided to give the game ball to LSU head coach Les Miles. When asked why, Saban said, “We just really couldn’t have won this game without Les. Complete team effort, but Les was the MVP today.”

* Kansas State remained undefeated with a 44-30 rout over Oklahoma State, but quarterback Collin Klein left the game with an injury that is speculated to be a concussion. Luckily, Bill Snyder wore his lucky Collin Klein footy pajamas when he passed out in his rocking chair, so Klein should be good to go.

* LeBron James passed up an opportunity to win the game again, but this time he hit Ray Allen for a corner three that was a four-point play and ended up being the game-winner in a 119-116 victory over the Denver Nuggets. Kevin Garnett has been missing for two days…

* Doug Martin rushed for 251 yards and four touchdowns in Tampa Bay’s 42-32 win over the Oakland Raiders. He never stopped running after the game with LaGarrette Blount chasing him from behind after he already knocked out two people in the Black Hole.

* Peyton Manning broke Dan Marino’s record after he led his team to his 48th career game-winning drive, to lead the Broncos over the Bengals 31-23. Though Manning insisted he didn’t lose a second-half lead on purpose, his hate for the horror film character Chucky, helped his motivation to get the record against Andy Dalton.

* Andrew Luck broke a rookie record with 433 passing yards in a 23-20 win over the Dolphins. Is it weird Luck had an entire large Papa John’s pizza before the game? Maybe Peyton and Andrew can be friends!

* The Los Angeles Lakers got their first win of the season after trouncing the Detroit Pistons 108-79. Kobe Bryant only had 15 points and was seen yelling at a basketball in the locker room after the game. “TRADER! TRADER! TRADER!” At that point Dwight Howard slowly walked out of the locker room in his new Iron Man costume.