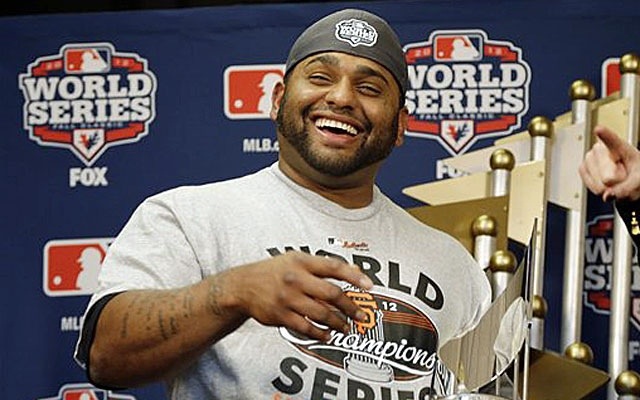 * The Notre Dame Fighting Irish scored 20 points in the fourth quarter and beat Oklahoma 30-13. After the game Oklahoma fans in covered wagons stormed towards the Irish when Manti Te’o stopped them in their tracks and yelled, “YOU SHALL NOT PASS!” According to nearby hospitals, they did not pass.

* The San Francisco Giants beat the Detroit Tigers 2-0 to go ahead 3-0 in the World Series. When asked about his struggles, Prince Fielder sang out: “Daddy wasn’t there! Cecil doesn’t care!”

* The Georgia Bulldogs forced six turnovers against Florida and beat the No. 2 team 17-9 and not sit atop the SEC East. The good news is, Will Muschamp was hired in this year’s newest horror film, “The Face of a Killer.”

* Reigning Sixth Man of the Year James Harden was traded to the Houston Rockets, and plans to sign a long-term deal with the Rockets. His reasoning: “I always saw my beard as an Asian cowboy. This is the best of both worlds!”

* The San Francisco Giants swept the Detroit Tigers to win their second World Series in three years. Pablo Sandoval was named World Series MVP after hitting .500. The Kung Fu Panda was not most excited about the trophy or new car, but something much more tasty: “Taco Bell is giving me free Doritos tacos for life!”

* The Oregon Ducks were hopped again in the BCS, this time by Notre Dame. When computers were seen smashed all over the Eugene campus, Chip Kelly slowly sneaked out of his office.

* Matt Ryan threw for 262 yards and three touchdowns to help the Atlanta Falcons remain undefeated. Andy Reid was later seen trick-or-treating to calm him down… instead he had a sugar rush from the candy and stormed the streets dressed as a giant pumpkin.

* Peyton Manning threw for 305 yards and three touchdowns in the Broncos 34-14 victory over the Saints. Manning threw a team pizza party at Papa John’s to celebrate the win!