Home › Sports › Wild Weekend of Sports: The Heisman Wears No. 12

Wild Weekend of Sports: The Heisman Wears No. 12 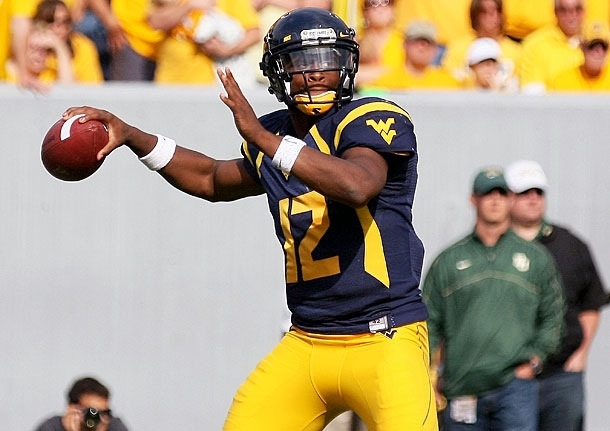 * Geno Smith went 45 for 51 as he threw for 656 yards, eight touchdowns and zero interceptions in West Virginia’s 70-63 win over Baylor. Let the Uncle Rico comparisons begin! Baylor’s Terrance Williams (314 yards receiving) and West Virginia’s Stedman Bailey (303 yards) almost had as many receiving yards in one game, than I had my whole senior year in high school…

* David Ash’s 29-yard completion to tight end D.J. Grant on fourth-and-six, set up Joe Berguson’s 2-yard touchdown run with 29 seconds left, giving Texas the 41-36 victory over Oklahoma State. Longhorns fans went wild at every bar in Texas, until they realized Texas plays Geno Smith’s West Virginia next game and all the cowboys’ moods flipped upside down, faster than a flapjack!

* Manny Machado’s go-ahead home run in the seventh inning, gave the Orioles a 4-3 win over the Red Sox, putting them tied with the Yankees atop the AL East. Let the Alex Rodriguez comparisons begin! Rodgriguez assured himself that Machado’s no A-Rod as he praised himself in the mirror. “THERE IS NO OTHER ALMIGHTY A-ROD! PSSH HE DOESN’T EVEN HAVE A COOL NICKNAME! M-MACH…BOO!”

* Mike Trout became the first rookie in Major League Baseball history with 30 home runs and 40 stolen bases in the same season, when he hit a two-out solo bomb off Yu Darvish in the seventh inning. Since the kid is pretty much perfect, the Rangers claimed that Trout must be racist when he went Gangnam Style in the dugout.

* After being down 10-6, the Europeans tied the greatest comeback in Ryder Cup history by beating the Americans 14.5-13.5. Tiger Woods blamed the loss on an upset stomach due to a long night at Chili’s…

* After the refs decided to hate the Green Bay Packers again, they decided to throw a flag on what would have been the go-ahead field goal for the New Orleans Saints. The Packers won 28-27, making the Saints 0-4 on the year. One word: Karma. The Packers received good karma from the refs after the first game-winning interception in football history. We all know why the Saints’ karma…

* After missing the game-winning field goal with no time left, Lawrence Tynes missed again after the Eagles called timeout, giving the Philadelpia Eagles a 19-17 victory over the New York Giants. After the game, Andy Reid was seen dancing circa <;;a href="http://

* The New York Yankees, Texas Rangers and Baltimore Orioles all clinched playoff spots. Unfortunately for the Orioles, Jeffrey Maier has his grinch grin on and is ready to kill Baltimore’s season of destiny.